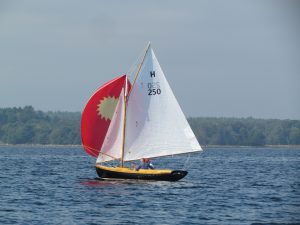 Kerstin Gilkerson and Andrew Murphy aboard the Herreshoff 12.5 Kiku during Barts Bash 2017

With eight registrants and 6 boats sailing the course, what looked to be a no wind day turned out to be a great afternoon with the added fun of finding the Women’s Keelboat Championships run by the Lunenburg Yacht Club close to the Bart’s Bash 2017 course. Although the race is scored by the folks at Barts Bash, we also score it ourselves, and this year one of the Class B boats, little Kiku took on the ‘big boats’ and much to everyone’s amazement came in a mere 91 seconds on corrected time after winner To’mater 3 and only 36 seconds after the International One Design Restless!