The Inshore Fleet, Class B, was dominated by two serious Bluenose Class sailors, Axel May and Andrew Murphy, tearing around the course, putting each other aground and beating each other up as only Bluenose sailors do… At the end Esprit, with Andrew and Odette Murphy beat Fish n Chips with Axel and Petra May with John MacLennan by 1 second! Denis Stairs, with crew Jennifer Smith and Sydney Lang, sizzled to third place on their Bluejacket Sizzler. 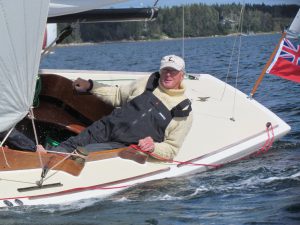 The Island Fleet, Class A was lead around the course by the beautiful classics Hayseed and Seneca, but once the results were tallied, that fast little folkboat Skeirkert with Uwe and Bernard won the day. In second place was the IOD Restless with Ted Murphy and third was the tenacious Tomater 3 with Warren Webber.

One of the most wonderful things about the regatta is the legacy of hospitality shown by the folks of Martins River….from the pre race lunch to the delicious potluck apres race it is all a great time!

And thanks to all the participants that came out and made the sailing so terrific!